Dîner at Château Bellefont-Belcier on Saint-Emilion 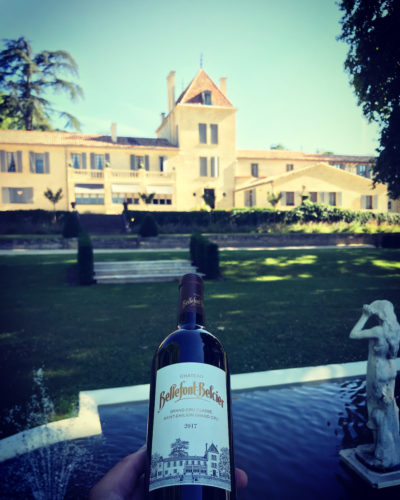 Meeting with the team of "Vignobles K"

During the Primeurs 2019 I was invited by the Vignobles K to meet them.

A quick introduction to Vignobles K: Created in 2014 by Peter Kwok, it is now a family business with Elaine, Karen, and Howard Kwok. The group currently has 7 properties, all located on the right bank of Bordeaux, in beautiful locations:

I visited two of their properties on Saint-Emilion :

This rather discreet domain in the town of Saint-Christophe-Des-Bardes presents an exceptional panorama of Saint-Emilion with vines in hillsides, and a very nice exhibition. It is recommended for all lovers of confidential domains with exceptional view. You can also stay at the Castle if you want!

I passed many times in front of this domain which is next to big names like Château Pavie, Château Larcis-Ducasse or Château Tertre Roteboeuf. The opportunity was given to me to really discover this property.

This magnificent Château that is visible from the road is a haven of peace where it is good to go. A landscaped garden, a fountain, and a tennis court are quickly visible. But behind the property is the most beautiful: the vines, which appear as in a small valley, giving a quiet feeling.

Inside the estate many rooms and suites have been arranged to receive you. I had the opportunity to stay in the “Saint-Julien” Suite which I highly recommend. It is chic and gives you the impression to be in a cocoon. A perfect place to recharge your batteries or to celebrate an event like a wedding (personal memo!).

Jean-Christophe Meyrou the Managing Director who has solid experience, both internationally and in Pomerol; Sébastien Menut the Sales Director; and Jeanne Mespoulede, Group Communications Officer.

But I also met Karl Todeschini, the owner of Château Mangot in Saint-Emilion and Château La Brande in Castillon Côtes de Bordeaux, who also presented his wines to me. After all, the more passionate we are, the more interesting is the tasting!

After visiting the place it is in the cellars that I could taste the Primeurs 2019.

So we tasted the whole range of Vignobles K that I highly recommend you. All the wines are shaped with the aim of the quality of the fruits and the respect of the place. This is quickly felt and it is really appreciable. Another good point, some wines presented are good value for money, in particular in the appellation Castillon, Côtes de Bordeaux.

Scores on 100/100 scale, tasting notes will be available on the subscribe section :

The wines of Karl Todeschini : 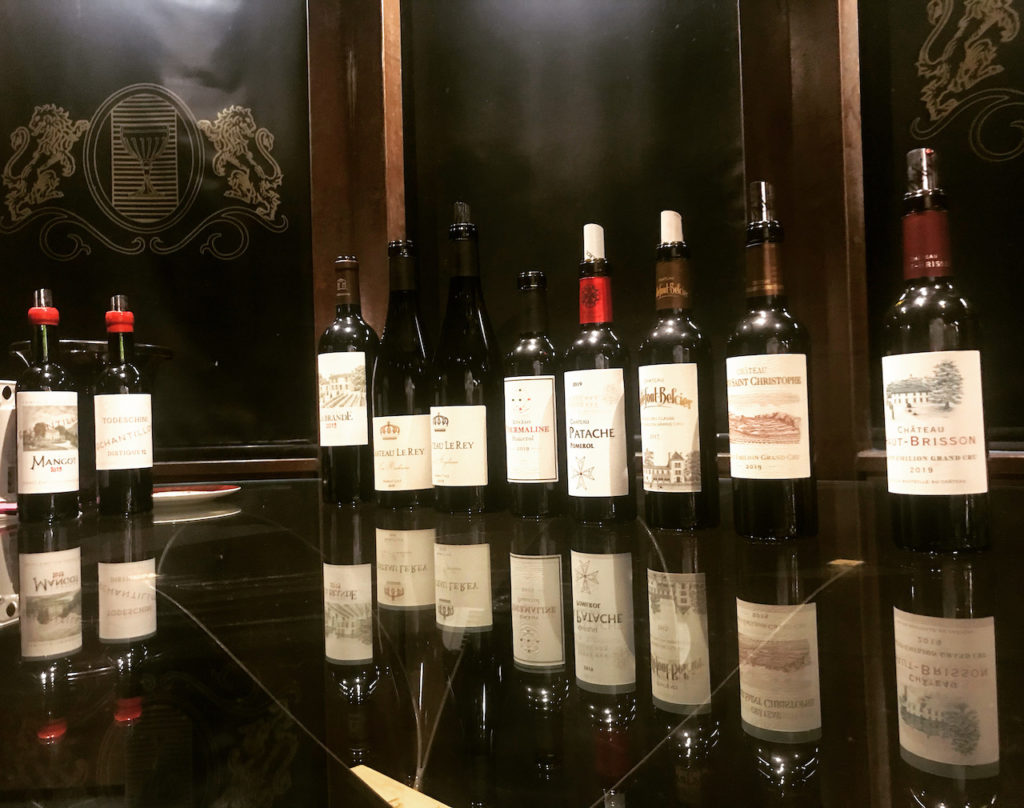 After the en Primeurs tasting we went to the dinner and taste some wines blind, not necessarily of the range. (Made by the Chef of «L’huile sur le feu» that I want to thank)

Things began magnificently with a Meursault « Les Grands Charrons » 2015, de Bernard Boisson-Vadot : radiant in the glass, with a very nice tension on the palate, cutting in an admirable way pronounced brioches’ notes.

Then we continue with the reds:  Château Mangot 2015 et Château Bellefont-Belcier 2015. Bellefont expressing quickly itself in a very expressive way but tending to fade towards the end. An interesting way to talk about what had been implemented since 2017, who is the first vintage of K vineyards at Bellefont-Belcier.  For Mangot, oxygenation did him the greatest good and he began to assert itself in our glasses.

Caught in our passionate wine discussions we started talking about old vintages. Jean Christophe and Sébastien returned with another blind surprise. It colour expressed a rather advanced age but it was unfortunately corked. However, the sensation on the palate was very delicate. The wine was revealed and I was shocked: Château Lafleur 1972, appellation Pomerol! Incredible to taste this wine blind! They were, of course, disappointed. I was trying to defend the indefensible— but Sébastien went to the cellar and came back with another bottle… this time the wine was beautiful, and still very old. A very nice complexity, with roasted notes, some red fruits more or less fresh, turning little by little towards kirsch’s notes . Always a good structure, I couldn’t stop marvelling about the complexity of this wine!

The wine was revealed: Château Fombrauge 1964, appellation Saint-Emilion Grand Cru. On beautiful notes of slightly dried red fruits, with at the same time a floral expression and a touch of minerality. Nice finesse of the tannins on the palate and roasted notes that appeared on the finish. This wine did not make its age, it did not finish opening. Truly superb!

The subjects around the wine were all throughout the evening. Of course I mention the sweet wines subject. At that moment Sébastien returns once again to the cellar (Sébastien a big thank you for these choices!) and comes to serve a liquor blind. It was a Tokaji, Carpinus 5 Puttonyos !

Such an incredible dinner! Shortly before leaving us I tried another time the 1972 Lafleur. The taste of cork tended to fade, but it still lacked freshness. Such a pity! On the other hand Fombrauge 1964 was still pleasant, imperturbable.

The team left me the keys of the property, and I was the only one left. So I went to sleep in my room. But finally I decided to go back down to the cellar since there seemed to be treasures. I came across a very rare bottle: A Château Margaux 1900. I had to open this bottle!

I managed to open it without much difficulty, and began to serve me a glass. A brownish color flowed and sumptuous aromas of truffles began to emanate from this divine bottle. Simply incredible! My eyes were closed until then, I would reopen them: it was 9:00 AM, I was in my bed, and I was going to be late for my next appointment! 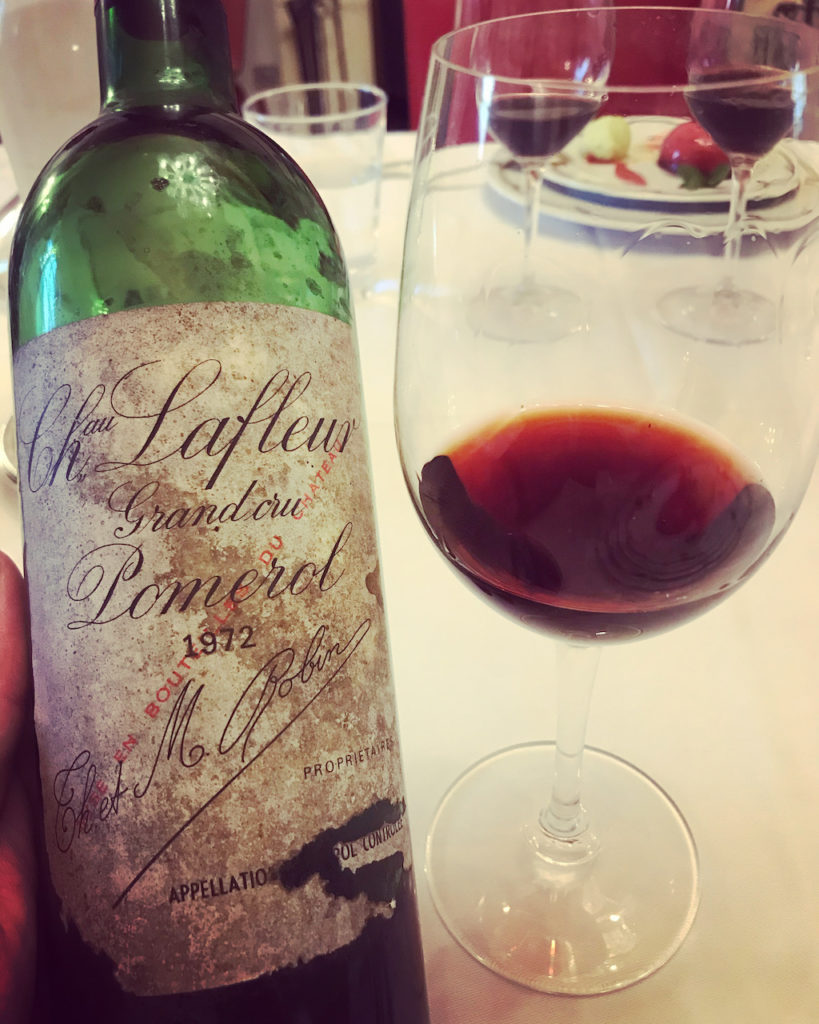 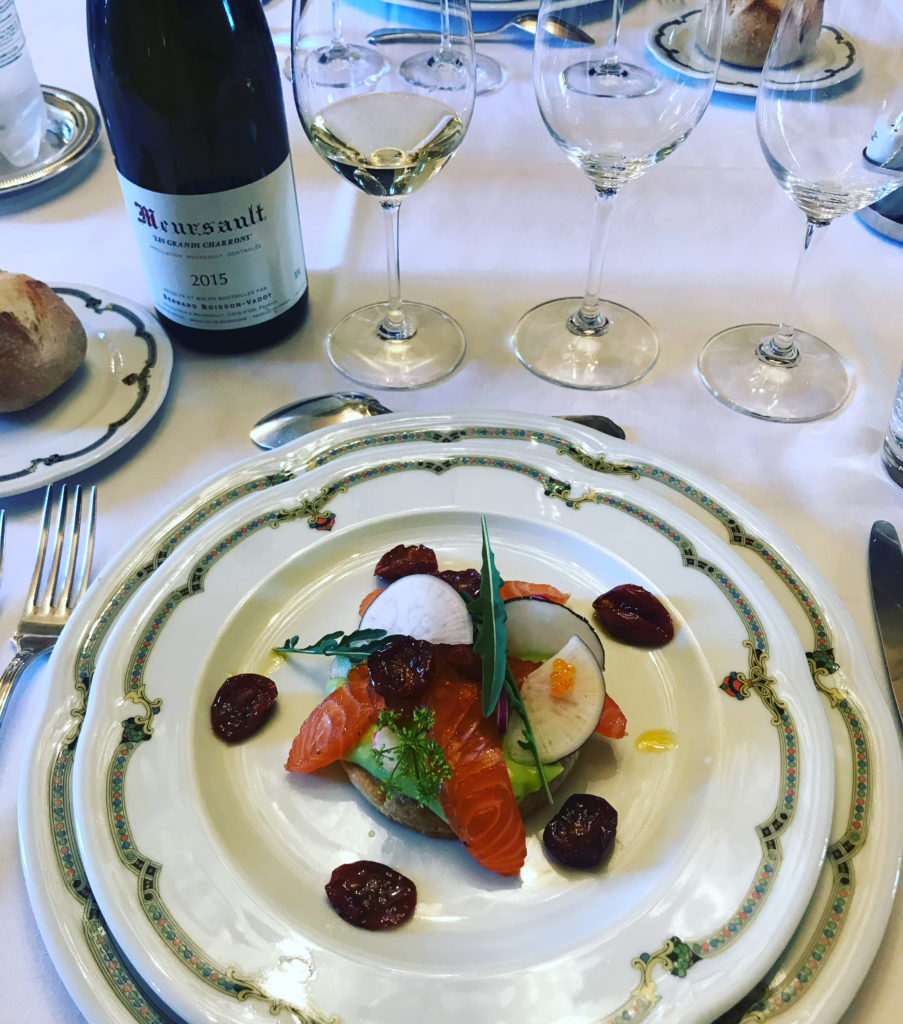 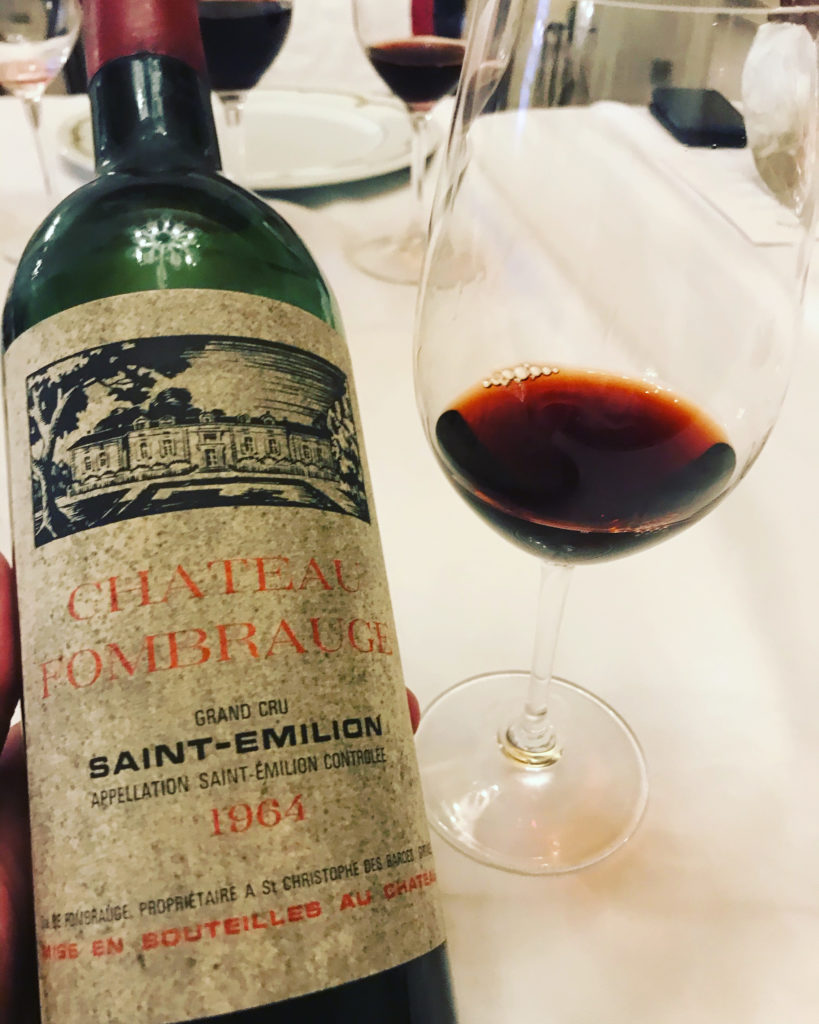 Thanks again Vignobles K for this wonderful moment and for the discussions between enthusiasts that we were able to have. The wines were magnificent and the experience unforgettable. To access the site of the Vignobles k click-here.  See you soon I hope! 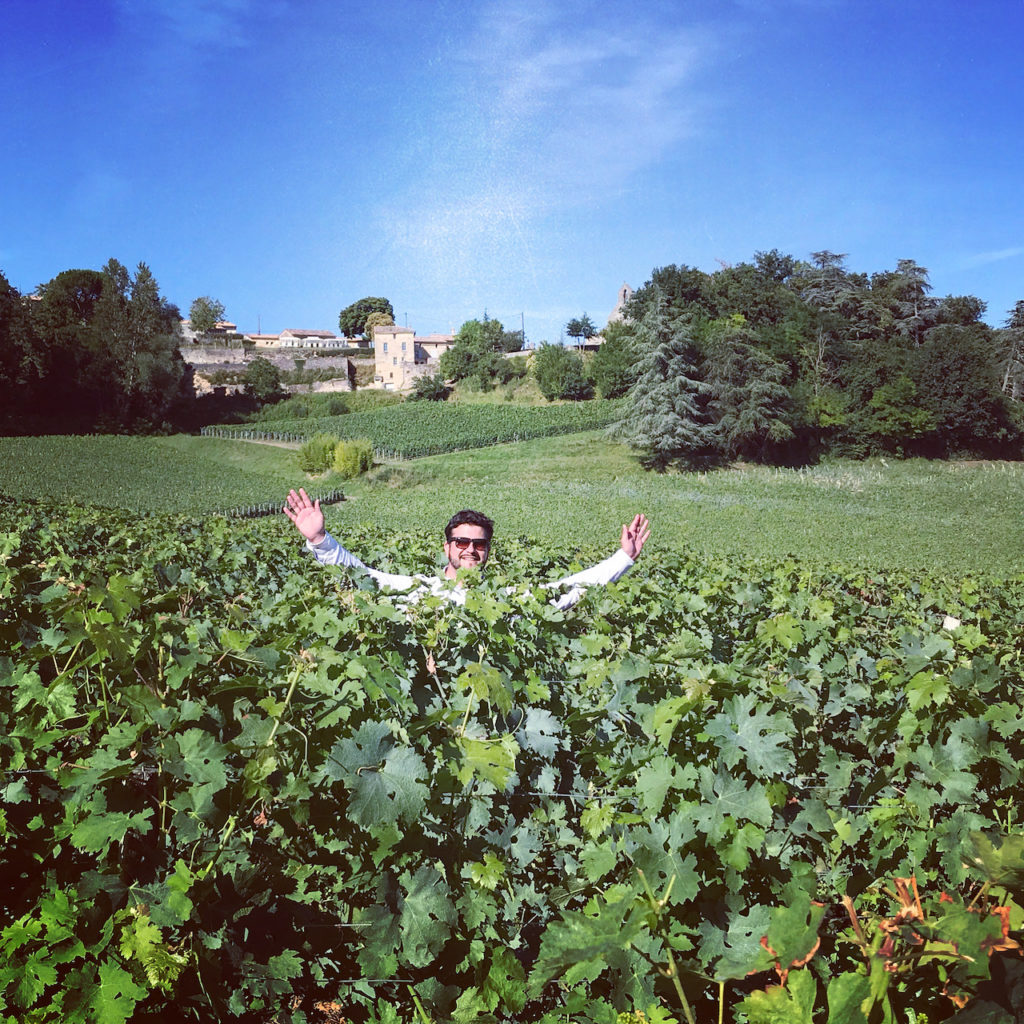