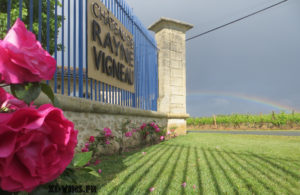 Château Rayne-Vigneau is part of the Sauternes appellation and is located on the commune of Bommes.

It has 84 hectares in one piece. The soils are clay-gravelly, and the basement has the particularity to be composed of semi-precious stones, ranging from agathe to sapphire.

The vines cultivated are the Sémillon (74%), the Sauvignon Blanc (24%),and the Muscadelle (2%) ( source site Rayne Vigneau).

The name of the domain comes from the first known owners but also from the name of the place called « Vigneau » (which would mean small plots of vines). The first traces of Château Rayne-Vigneau date back from the 17th century.

Over the centuries this area has become famous on many occasions. Raised to the first growth Grands Crus Classés 1855 at the 1855 universal exposition in Paris, Château Rayne Vigneau has the particularity to have been celebrated a second time at the next edition of the universal exposition in Patis. It was in 1867, and this brought the 1861 vintage into the legendary wines.

– Château Rayne Vigneau , the first wine that can be appreciated young but can also cross the ages and develop an incredible complexity.

– The dry of Rayne-Vigneau, a very well made dry white wine, which allows the property to diversify its styles, to exploit differences of the soils and to be able to offer volume during difficult years for the creation of the botrytis or even according to the market demands.

– The « Gold » cuvée, only produced in the best years in very limited quantities, on average 700 units. This wine is made in 100% Semillon style, and with super premium oak barrels for a 24 months ageing. An exceptional and very rare wine.

Château Rayne-Vigneau is truly a great Sauternes wine. It is also an interesting property where to visit, with a magnificent view of the Sauternes appellation but also with many animations offered throughout the year. The estate is a precursor of wine tourism in the region and there are original activities, such as tasting perched on the trees (11 meters high!).

The wines produced are all of high quality. Some vintages of this property are legendary. I will never forget the 1947 vintage which gave me great emotion when I had the chance to taste it (link of the tasting here).